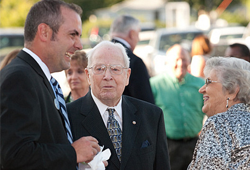 It’s quite an honor to be an Ambrosian. Ambrosians use their talents to enrich the lives of others. And that is exactly what Bill ‘50† Lawrence and his wife, Barbara, did and continue to do.

Bill graduated from St. Ambrose in 1950 with a degree in Commerce. He married Barbara the year after and then dedicated his life to the U.S. military. He proudly served his country through the U.S. Navy and in a civilian role at the Rock Island Arsenal. Aside from the service to his country, Bill served his community through active membership in his church and organizations, such as the American Legion and Meals on Wheels. But offering his talents wasn’t enough. The Lawrences were active in the St. Ambrose community. They attended many theatre productions, chaired Mardi Gras activities, and were loyal President’s Club members.

“Bill gave every year. We even gave a donation when we had five little kids,” Barbara recalls. “We couldn’t be President’s Club members at first, but as soon as we were able, we joined. After many years of supporting the university, they increased their commitment by becoming members of the Heritage Roll of Honor.

Barbara says they support St. Ambrose for a variety of reasons.

“It’s a Catholic university with a beautiful school. Our son and daughter are grads, as well as a daughter-in-law and grandson. We are all Ambrosians. And everyone we’ve worked with from St. Ambrose is so supportive and very friendly.”

In September 2013, Bill passed away. But his passion for St. Ambrose lives on. Barbara plans to continue supporting St. Ambrose at the President’s Club level. She urges others to provide their support as well.

“Bill used to say there was always a need at the university, like updates in many of the halls. If people haven’t gotten involved already, they should. It’s such a great school. I’m pleased with St. Ambrose in many ways.”