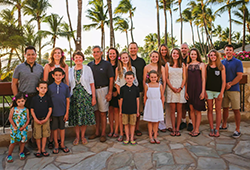 There's a saying, "When one door closes, another door opens." When Jack Kearney looks back on his career and life so far, it seems that many of those doors have a St. Ambrose connection. In fact, Jack could have never guessed that his high school job would open the door to a lifelong relationship with St. Ambrose. But after 56 years, Jack is still as closely tied to St. Ambrose as he was when he was hired as a temporary worker in the summer of 1961.

"Saga Food Service, who managed the dining facilities on campus, hired me and other high school students to fill in for the college students during the summer months. We provided service in the priests' dining room and the cafeteria serving summer school students and other groups using the college. The breaks between meals each day gave us a lot of free time to investigate all parts of the campus, above and below ground," Jack recalled.

That knowledge of campus would come in handy. During his senior year, Jack and four other Assumption High School students were awarded a Presidential Scholarship to St. Ambrose. The award amounted to four full years' of tuition assistance, making Jack's financial obligation to attend college considerably less.

That same year, Jack began seeing Mary Lynn Wahlig. Little did he know, his life was starting to take shape.

"My Intermediate Accounting professor, Wally Evans, announced to the class that a local accounting firm wanted to hire a student to prepare tax returns during their 'busy season.' Through this St. Ambrose connection, I was able to secure this part time position which led to a 40 year career with that firm." (But that's skipping ahead a little bit.)

Jack and Mary graduated in May 1969 and married the following month. Mary began her career as a kindergarten teacher in the Davenport School System, and Jack started full time employment with the CPA firm of McGladrey, Hansen, Dunn & Co. (now RSM US LLP).

In November of 1969, Jack was drafted into the US Army and served most of his tour at Schofield Barracks, Oahu, Hawaii, and Mary joined him after completing her first year of teaching. After his honorable discharge from the service, Jack returned to McGladrey and was promoted to Partner in 1976.

"One of my first client assignments after returning from duty was the St. Ambrose financial statement audit."

The connections continued. Jack spent his entire career at McGladrey, eventually retiring in May 2009. For a time, he even recruited accounting students from his alma mater as entry level accountants for his firm.

At home, Jack and Mary had four children, Sue, Tom, Julie and John (with 10 grandchildren added to the mix years later). Their eldest, Sue, followed in her father's footsteps and attended St. Ambrose, graduating in 1992.

With a beautiful family and a great career, Jack and Mary started looking for ways to give back. Beginning in 1986, the couple made yearly donations to St. Ambrose.

"Our giving started as a way of 'paying back' the four year full tuition scholarship I was awarded. After a few years, we started giving $1,000 annually, which was the annual value of my scholarship. Over time, the donations increased incrementally."

"Then recently, Sally Crino from the Advancement Office and Sandy Cassady, the vice president of strategic initiatives and dean of the college of Health and Human Services, asked us if we would support the Wellness and Recreation Center fundraising goal. The timing and income tax impact was right for us to use our IRA to fund this pledge, so we did."

With a major financial commitment to the project, it's only natural to wonder what drove the couple to support the latest capital project on campus. But Jack responded that there was no "driving force."

"We have been afforded many gifts and blessing throughout our life, including a beautiful family. Giving something back allows us to do our part in opening a door so that other individuals and families can share in the St. Ambrose experience."

"St. Ambrose has continued to be a good citizen of the Quad Cities as it expands its academic offerings and its campus footprint, a source of talent for local and a broader marketplace, the university is a source of pride for me as an alumnus."