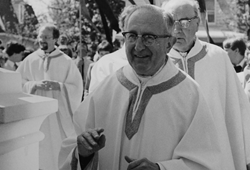 For decades through the mid-1980s, Father Herman Albert Strub was something of a legend at St. Ambrose College. Students clamored to take his theology classes, "Introduction to the Old Testament" and "Introduction to the New Testament," which were held in Lewis Hall, Room 111, a sloping, theatre-style lecture space. There was a huge periodic chart above the black chalkboard. In the corner was a series of Biblical maps that Father Strub consulted regularly during his lectures. He loved that he was teaching theology in the science building. "The beginning of the religious experience is to see into the marvel of the universe," he often proclaimed.

The class size was limited to 30 students, but Father Strub routinely signed petitions for admission to his class and usually taught sections of 40 or more students- a big deal on the tiny campus. There was assigned seating-alpha order in every-other seat. He knew immediately at the start of class who was missing. But students rarely cut his class because the value was so high-he made the books of the Bible approachable and compelling, not an easy task with young people. And he'd always leave you with a nugget to mull over. "To be obedient to God's will-that's the essence of perfection," he used to say. Although he was erudite, engaging, and entertaining in the classroom, he claimed this was the real reason for the popularity of his courses: "I'm an easy grader!"

There were no textbooks to purchase, which was a bonus. Instead, Father Strub was ahead of his time and handed each student essentially a free course pack: 120 pages of sourced content that he had written about all of the books in the Bible, typed single-spaced on legal-sized paper, which he had personally photocopied and stapled in the business office. A voracious reader, he updated these notes every semester. Father Strub's own copy of his notes were heavily annotated in handwriting using assorted colors of ballpoint ink with references in Greek and Latin, and other facts from scholarly to pop culture resources that enlivened his lectures. He addressed all students formally, using Mr. or Miss. If Father Strub noticed you weren't paying attention to his lecture, he'd stop mid-sentence and directly ask the daydreamer, "Miss Brinati, am I boring you?" Then he'd chuckle aloud to himself and add, "You're all good boys and girls. Now pay attention."

By the time my classmates and I encountered Father Strub in 1980, he was winding down a 40-year teaching career and just wanted to be left alone. While friendly in the classroom, he was famously reclusive outside of it. He didn't engage in social aspects of the school community like many of the other professors did, which was a hallmark of the culture at St. Ambrose College at that time. He was so 'old world' in some ways, very decorous given his upbringing as the son of quietly prosperous Iowa City merchants, and regimented thanks to his stint in the US Army during WWII. But we were persistent and he eventually warmed to our attention. When he finally consented to dining with us in the cafeteria, students kept greeting and chatting with him every step of the way that by the time he reached our table, his lunch was cold and we had finished our meals.

He was genuinely amazed by the interest in "an old coot who's set in his ways," which was how he referred to himself. "You need to get out more," was our advice to him and we did our level best to socialize Father Strub. We invited him to our intramural games. He attended a few at 6:00pm, otherwise it disrupted his schedule. He watched us play flickerball on Timmerman Field from the window of his Hayes Hall residence on the top floor, and he would cheer on our basketball team from the raised circular track encompassing the LeClaire Hall gym. During a class following a game, he'd work in a sly comment during his lecture about someone's performance in the competition, something along the lines of: "When St. Paul was on the road to Damascus, Miss Brinati, did he have to worry about missing a free throw in a close basketball game? Of course not, because the year was around 34 AD and basketball wasn't invented until 1861. Even so, his conversion was successful." Then he'd chuckle aloud to himself. It was vintage Strub!

As editor of the St. Ambrose College Oaks Yearbook, I dedicated the 1981‒1982 edition to Father Strub with this inscription: " Generations of Ambrosians have enjoyed his Old and New Testament classes. "The best thing to have after sanctifying grace is a sense of humor," laughs Father Strub in his famous Lewis Hall ‒ Room 111 habitat. All of his lectures were colored with his lively comments. "The old man lives for three things: saying Mass, seeing his students, and eating breakfast," he chuckles. Father's humor is infectious. No one will forget his celebrated definition of Faith: "a great confidential trust in God." This book is dedicated to you, Father Strub. May you continue to inspire generations of Ambrosians."

We appreciate such a warm and personal tribute to Fr. Strub from Teresa. Unknown to her and his other students is that in Fr. Strub's generosity of spirit for the students of St. Ambrose manifested itself in other ways. In 1990, Fr. Strub arranged for a gift annuity with St. Ambrose (providing him with a monthly income stream) and the charitable remainder value going to St. Ambrose upon his death. In 1993 he made a generous gift in support of the construction of the new library on campus. Upon his death in July of 2000, Father Herman Albert Strub left St. Ambrose a generous bequest in his will which was directed to support the building of the "university center" now known as Rogalski Center. How appropriate it is that Fr. Strub's legacy continues today in gathering spaces across campus, used by students and faculty alike .