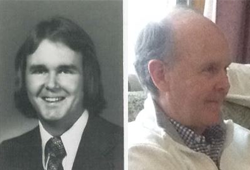 James Carroll '74 made his decision to attend St. Ambrose College early on — when he was six years old. He looked up to his cousin Joe Brick who, although fourteen years older, "made a fuss over me anyway." Joe went to Dowling High School in Des Moines and graduated from St. Ambrose in 1959, and Jim followed his example. Joe went on to become an attorney, and Jim planned to go to law school, but that dream never came true.

"I almost left in my freshman year," said Jim. "I had a bad match for a roommate, and I wanted to leave. My Dad said to give it another year, and that next year was the best year of my life."

"Dr. Rogalski was Dean of Students then, and he got me my own room and encouraged me to get involved and give SAU a chance. I was active in the Student Government Association and the faculty were all wonderful. It was such a bad start but it all turned out okay."

The job market in the fall of 1974 was difficult, and Jim floated a bit hoping to find not just a job but a job with the right fit. He followed his sister and her family to Colorado, looking forward to a new part of the country and got a job with an insurance company, which shortly transferred him back to Iowa! As fate would have it, Iowa is where Jim stayed. He became a Sales Representative for Metz Baking Company (later Sara Lee) and was able to help care for his mother, with ALS.

"After retiring five years ago, I reached a point to step back and take stock of things," said Jim. "I don't have a lot, but I wanted to make sure that I took care of three things — my parish, my nieces and nephews, and St. Ambrose."

Jim notified the University that he was including St. Ambrose in his estate plans, and spoke with Sally Crino, Assoc. Vice President, Legacy Giving and Capital Initiatives Director. Sally let him know that he will be inducted into the Bishop McMullen Legacy Circle this fall. Established in 1978, the BMLC recognizes donors who give gifts of $5,000 or more to the Endowment Fund, or who notify St. Ambrose of their intentions to make provisions for the University in their estate plans.

"You know, it had always been my intention to do something for St. Ambrose, but sometimes you just get too busy to sit down and do it. Like I said, it's not going to change the world, but it's my way of saying thank you. I was at the right place, at the right time."