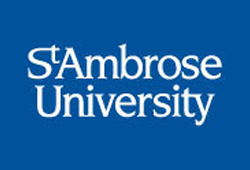 PJ Shovlain has fond memories of St. Ambrose University. "I loved the comradery, the wonderful atmosphere on campus and the food," PJ recalls. "I worked in the dining hall part-time for a scholarship while I attended SAU." He attended St. Ambrose from 1959-1960, majoring in economics and marketing.

"My father had a lot to do with me choosing SAU. I grew up in Southeastern Iowa and he was afraid I could get lost in the crowd at a larger university, so he wanted me at a smaller, Catholic school," Shovlain said. "I also had a long line of family members attend St. Ambrose, so we knew it was a great university."

PJ went on to graduate from the University of Iowa in 1962. After graduation he joined the United States Air Force, from which he was honorably discharged at the conclusion of his five years of service. PJ then moved to Florida, where he continues to reside today. He began to work in the automobile business and in 1970 built his own dealership, which he owned and operated for 20 years. During this time PJ was also investing in real estate, buying property, fixing it up and then selling it.

PJ worked long and hard for his funds and when it was time for him to start thinking about what he wanted to do with his estate, he knew there was a process he had to go through. He first needed to figure out what his objective would be. "My primary goal was to invest in scholarships to make certain the earnings would continue to work long after I was gone," PJ said

His advice to others is, "when deciding what you want to do with your estate, you need to know your goal. From there you can determine the best plan that works for your situation," PJ said. "With the option I chose, I can have my cake and eat it too." St. Ambrose University is honored to be among the various programs benefitting from PJ's generosity.